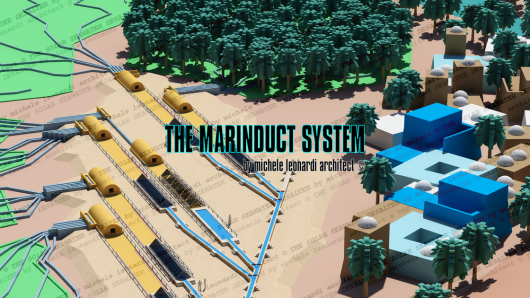 mentioned above, in each new oasis the sea water is desalinated by its inhabitants, using the most appropriate type desalination of plant: solar distillation, vapor-compression distillation, electrodialysis membrane, etc.

The same applies to the energy supply system of the desalination plant, for which a separate site will be set up, but nearby, in a special new artificial oasis, with photovoltaic energy plants, or hydrocarbons (gas, oil).

Here, instead, we propose a rudimentary, low-cost desalination plant, useful for very small communities, such as that of small oases. It's simply a low, long greenhouse with a salt water basin at its base.

So this solar energy desalter (ie evaporative type) works on the simple principle of the greenhouse effect.  It is a greenhouse that increases the temperature of the sea water contained in an internal basin, until it evaporates gradually. The steam, the water vapour that gradually forms and condenses on the glass walls of the greenhouse, it is then diverted to a collecting duct, through the dripstones of the glass in the greenhouse.

These dripstones are nothing more than continuous indentations, knurling, the grooves of the windows themselves: the glass in the greenhouse is lined internally, as can be seen in the drawings below. Finally, nothing special, the condensed water collected in the ducts is diverted to another pipe parallel to the mobile greenhouse trucks, and equipped with individual mobile connections, and from there sent to a water tank for collecting the fresh water.

How is fresh water purified and mineralized? Simply by further filtering, ie through the sand, according to the well-known "Venetian well" principle.  In fact, if with this system the Venetians have supplied themselves with water for centuries, it is not clear why we now have to pose so many problems to use an equally simple system, at least conceptually, given that the solar watermakers we are talking about here certainly do not manage the large masses of salt water that manage the large industrial desalination plants serving large cities and large desert communities; industrial desalinators must be equally large in terms of construction, management and maintenance costs.

In fact, here we are dealing with small communities of desert inhabitants. In this case industrial desalinators are not needed. 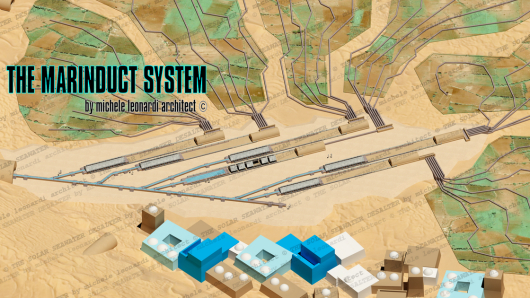 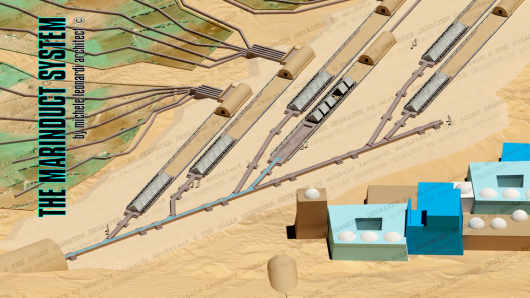 Above, in this picture is showned the structure of the greenhouse desalinator here proposed, and its mode of operation, can be understood.

Sea water is introduced into the greenhouse water tank, the basin.

When the sea water has evaporated, the modules with undercarriages that make up the greenhouse are disconnected, and then they are moved along the rail, so you can work in the tank, for pick up the salt left in the basin. ( In reality the process is a little more complex, but we skip other steps, such as the residual brackish water, which will be poured into a second tank, open to the sky, adjacent to the first, at the end of obtaining the final secondary by-product, that is, sea salt).

Why are mobile modules necessary? Because inside the greenhouse it is so hot that no one can work inside it.  Instead in this way the carts are moved on rails, and during the day, in the morning, or even at night, you can work in the water tank by removing the salt or the remaining brackish water.

But in my opinion the rail system is the simplest and the best.

Another important thing, already mentioned in the previous pages: if the solar desalinators were to contaminate the soil of the oasis with too much salt dust, it is possible to create an artificial oasis specific for the desalination greenhouses, naturally positioned near the basic oasis, that is the one with crops and dwellings.

the various phases of the whole process, always in broad terms:

1-A) The still cold sea water is dispensed and diverted into the greenhouse basin:

(Sea water must be kept cold along the entire course of the Marinduct, from sampling at sea to the local cisterns of each oasis, for many reasons which we fail to mention here, so as not to be lengthy; local cisterns are useful for accumulation, compensation, regulation of water flow, etc.) 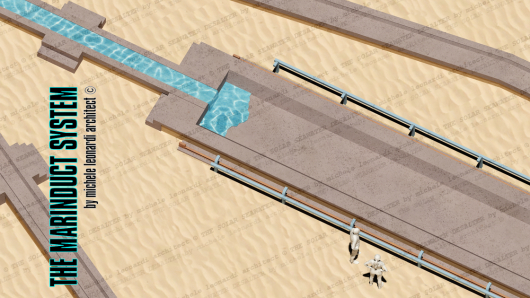 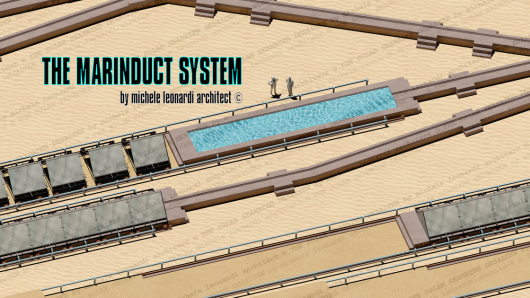 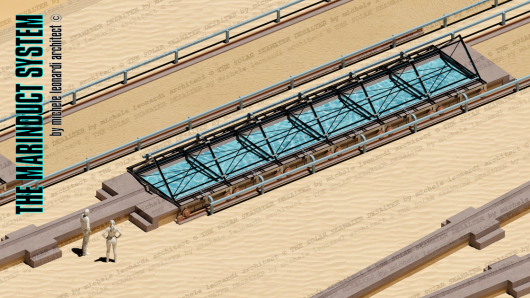 1-B) In this first phase, the single greenhouse trolley-modules are actually already positioned above the tank, and already attached to each other, as illustrated in the following drawing below.  In fact the two drawings above serve only to show where the seawater mass ends up.

1-C) The single greenhouse trolley-modules are fitted with gaskets, otherwise it is obvious that water vapor would escape from the "trap" of the greenhouse. 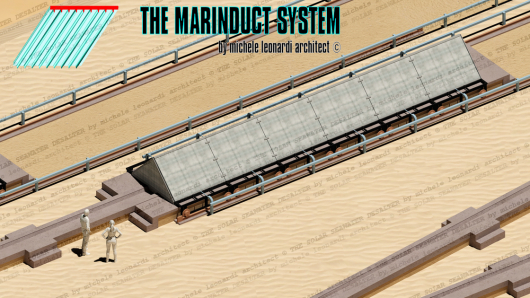 2)  The condensation water slides along the serrated internal walls of the glasshouse, up to an internal rain gutter - but inside the greenhouse, like you can see in the drawings -, and from there it is diverted towards a longitudinal pipelines outside the greenhouse, connected by means of furniture tubes to each greenhouse module. 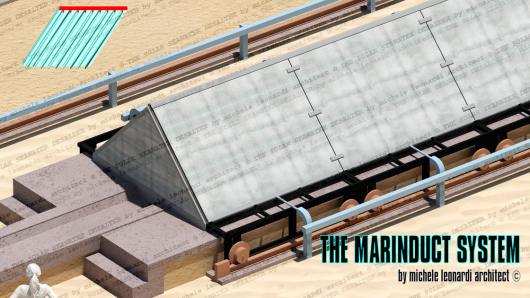 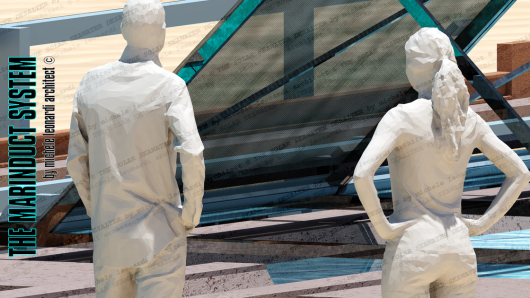 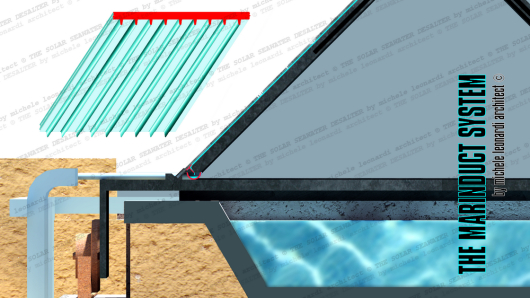 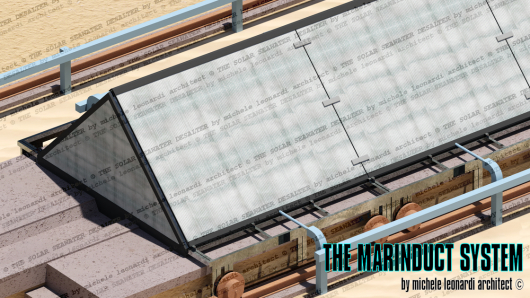 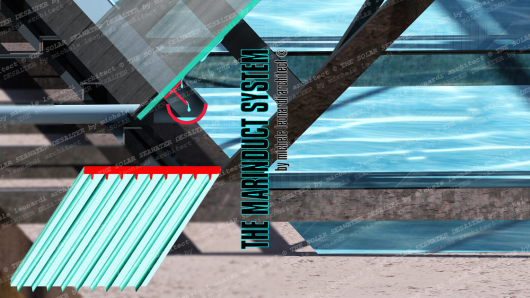 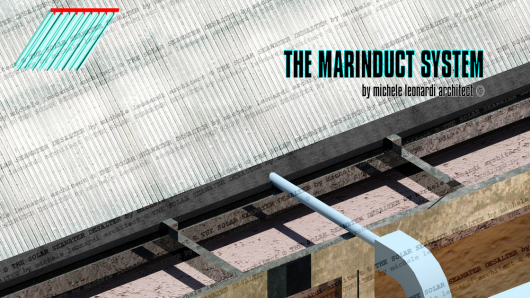 3)  As a secondary by-product, at the end of the evaporation of sea water, sea salt is directly obtained  (or, as already mentioned, a brine to be further processed in a side open-air basin, until nothing else remains but sea salt).

Once the sea water has evaporated - or once the brine has been transferred to a second open-air basin - it is useless to waste time carefully scraping the surface of the salt-encrusted tanks, so later the water tank will be filled again with salt water. 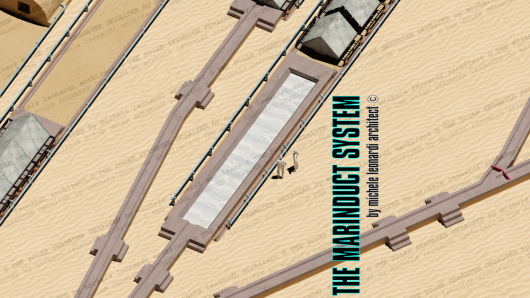 4)  The two external pipelines are connected to a cistern for collecting the fresh water extracted.

In reality, as already mentioned, the plant will be slightly more complex, because the water will be conveyed to a first cistern with a bed of sand, to be filtered and mineralized, and from here it will then be sent to a second final cistern, arranged in series and coupled, for the accumulation of fresh water. 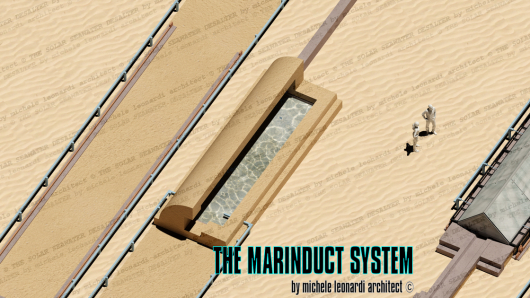 5)  All the ducts, cisterns, tanks, etc., along which the sea water flows or is contained, are covered with hydraulic concrete of the same or similar composition as that of the extremely resistant Roman concrete. 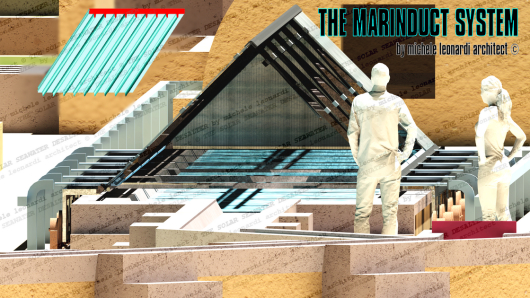 6)  The wheels of greenhouse modules and the rails will be of common iron. But even the metal frame of the single greenhouse module can be realized by the use of  simply iron, since the sea water not in motion (waves, coasts, beach, ecc.) has a reduced capacity of corrosion.

Have you ever had a shower in a shower cabin? And in a sauna? Have you ever been inside a greenhouse for tropical plants? In this kind of places the steam and water condensation are everywhere.

So ... with all the sun that there is in the middle of the desert, the water condensation inside this kind of desalination greenhouses certainly is not missing!  Of course, only the experimentation can give a real answer, but there is a good chance that it will work, it's evident.