THE ROLLER COASTER OF STAIRS, 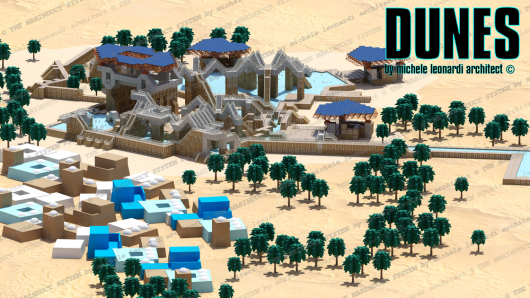 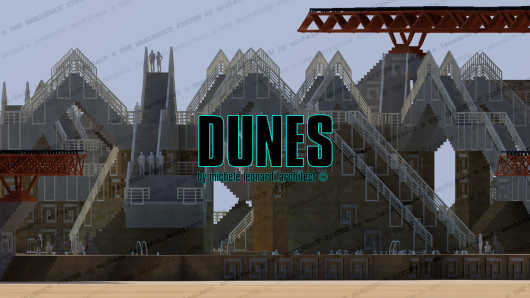 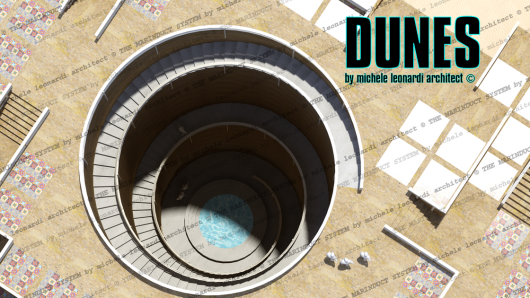 can be a fun water park in its own right, or a component of a large amusement park. In the preliminary project that can be seen in the images, the Roller Coaster of Stairs would extend over a total of 1,3 hectares (equal to 13,000 square meters, equal to ca. 4 acres), while the only pools would extend over less than 5,000 square meters (ca. 2 acres) excluding the storage and compensation basin.

The functional program of the "Roller Coaster of Stairs":

1) A compensation basin for sea water, and / or tanks, water supplied by the Marinduct, with the function of accumulation, compensation and final supply of water, substantially thermal.

2) A connection channel between the basin and the swimming pools of the water park.

4) 3 labyrinthine paths at ground level, connected to each other and connected with the various pools and with the elevated path of the "Roller Coaster of Stairs".

5) 3 pool areas all connected together.

7) "The Roller Coaster of Stairs", that is an elevated labyrinthine path (in reality it would not be a real labyrinth, since one cannot get lost, apart from a few short routes without a way out).

8) "The Well of 157 Steps", and at the bottom, underground, a circular fountain with a respective water basin in which to throw the coins, as is done at the Trevi Fountain in Rome.

"The Well of 157 Steps" would be about 23 meters deep in all (like a 7-storey residential apartment building of approx.), with a 15 centimeters rise approx. (variable depending on the size of the tread) and average tread variable between 55 centimeters at ground level, up to 30 centimeters approx. at the bottom of the well. There would also be 3 or more resting niches, with benches for seating, arranged along the entire staircase. As an indication, we recall that the steps of the Grotta del Turco in Gaeta, in Italy, are many more, that is about 300 steps, with a drop of about 50 meters, while those of the double helicoidal staircase of the magnificent Well of St. Patrick in Orvieto , still in Italy, there are 248, with a depth of 157 meters. Another example, in Greece, to reach the sea level from Santorini, that is the Port of Fira, it is necessary to go down even a stairway of 600 steps. Obviously with all this gymnastics the inhabitants of these places are necessarily "all healthy".

Depth of the basin swimming pool:  the pools and canals of the Roller Coaster of Stairs will have an average depth of about 1.40 meters, with deeper exception areas (diving area, bounded by special floats) and other areas with a depth of less than one meter, for childrens accompanied by their caregivers, as well as clearly marked and delimited.

Electricity: the photovoltaic roofs would ensure all the electricity needed for the operation of the plants (hydraulic pumps, any water features, fountains, bars, services, etc.).

Construction system: the architectural structure of the complex would be constructed using reinforced concrete hollow caissons, prefabricated and essentially of 4 types combined: one covered with brick, another simply with exposed concrete, a third type of caisson with a geometric decorative motif, as seen in the images, which would exalt the systemic modularity of the building; and finally a fourth type of caisson with steps, finished in cement or brick.

Secondly, the prefabricated hollow caissons in reinforced concrete can be prefabricated and installed in many ways: with stacking grooves and metal bolts to be fastened to one another, with internal metal reticular beams to form large beams, with solidifying concrete jets, they could also fill with sand to further stabilize the caissons placed at the lower levels, if there was a need, for example to contain the water pressure along the edges of the pools, etc.

Safety: the parapets will be 110 - 120 centimeters high from the floor, with fissures not exceeding 13 centimeters (a child's head must not pass). At the most extreme points of the Roller Coaster of Stairs, the parapets will also be taller, up to about 160-180 cm, as seen in some images. As for the longer and steeper stairs, there will be transversal safety guardrails, in case of accidental fall and rolling of people along the stairs, or more simply an intermediate landing every 15 steps max, as some regulations require and the good sense. However this is obviously not an executive project, but only preliminary and illustrative of the "Rollercoaster of Stairs" idea.

An installation of this kind would obviously require staff to supervise, with lifeguards, video cameras, loudspeakers for emergencies, warnings, private guards, etc., and even a small first aid with medical safeguards.

Like all my other projects, even this "is looking for a client", even if for a professional the chances of receiving such a job are probably more or less equal to those of winning the lottery, especially in Italy and these days, but not only in Italy. 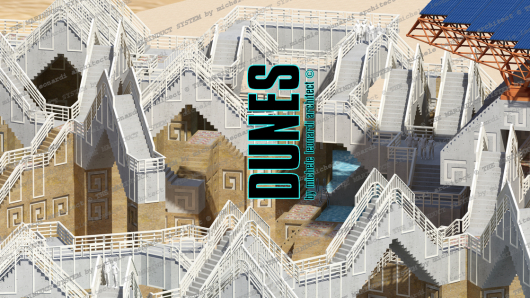 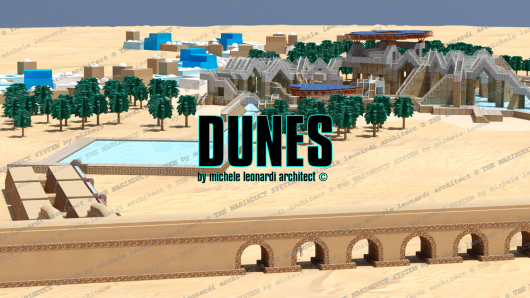 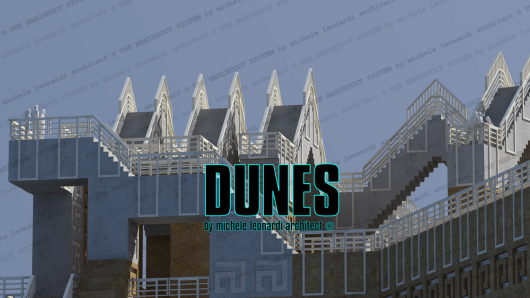 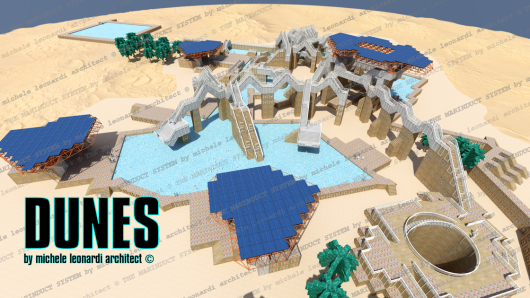 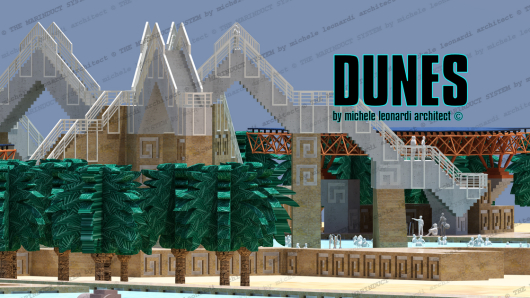 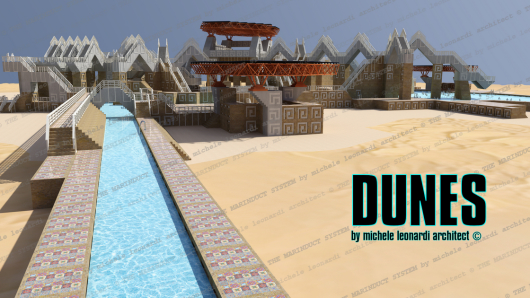 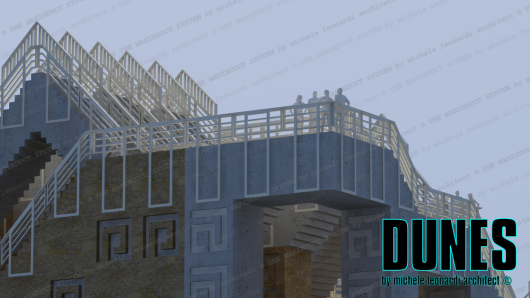 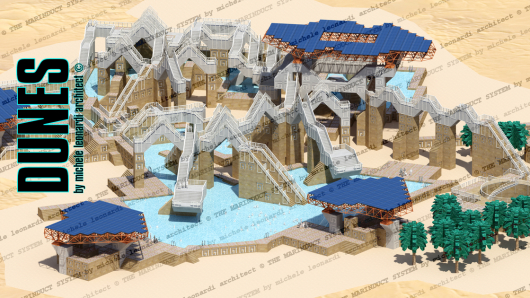 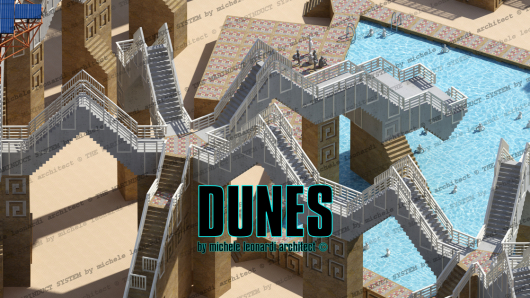 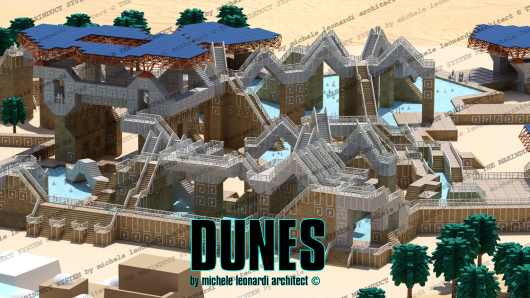 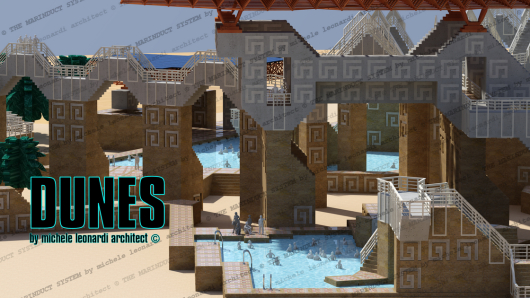 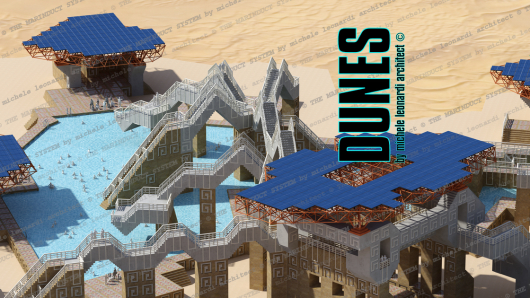 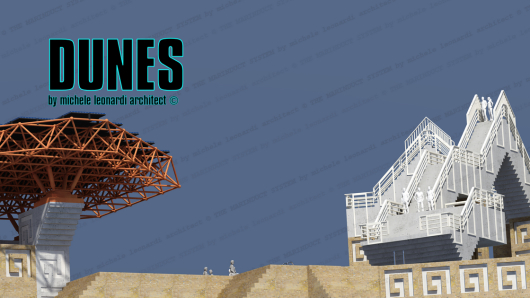 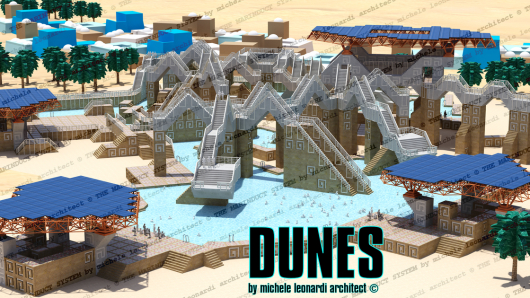 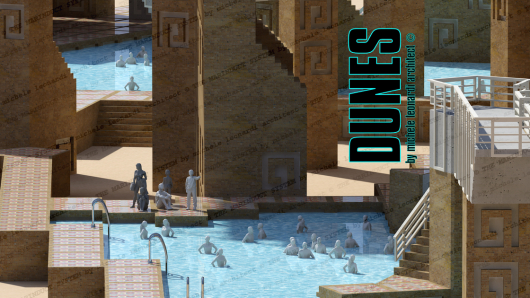 Project submitted in October 2019 to the attention of many businessmen in the water parks and amusement sector, both with plants in Italy and abroad.

Given that all entrepreneurs in general always respond to designers when they propose new ideas to them, I have not received any response from those I questioned.

It's too bad that this project has not been taken into consideration:  the children would have had a lot of fun in these unusual spaces, and the adults would have had one more chance to have more fun in their spare time.

An architecture of this type could also be built and managed by an efficient public body.